Doctor Who and the Valiant Endeavour

For part two of today's postings I'll cover Saturday's game of DWMG ( a great rule set to play with).

Cybermen have disabled and boarded the Valiant Endeavour, taking control of key locations throughout the ship in swift succession.  The Doctor and Liz must get back to the TARDIS with as many of the remaining survivors as they can and if possible collect data on why the Cybermen have taken control of the ship.  A nice simple objective for this game, get the Doctor out of there with as many other survivors as possible, the Doctor's side were set up in engineering with the TARDIS located in the command section with the Cyber force dispersed throughout the ship.  For the Doctor's side to win he and Liz had to get back to the TARIDS with extra victory points being scored for each survivor who makes it with them and bonus points for picking up the intel (located in the crew quarters).  The Cybermen's job was simple, stop the Doctor at all costs with points scored for each survivor picked off.
This was a great game with quite a bit of narrative going on throughout along with making up rules for some interesting situations as we went along.  I had a blast (quite literally unfortunately) playing the Doctor however is was for nought as he was caught in a Cyber crossfire which ended the game with the Cybermen being utterly victorious.

Highlights of the game: 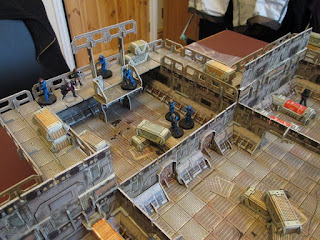 The Doctor's starting position in engineering 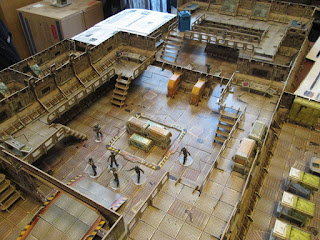 The Cyber forces were spread throughout the ship taking key positions


The game started with the ship in lock down so all doors were sealed, the Doctor could have chose to try and tinker with a doors wiring to open it (intelligence test) but this would have alerted the  Cyber Forces of their whereabouts. 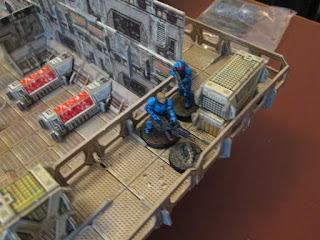 The Doctor's side split up and travelled through the maintenance corridors to infiltrate into the main part of the ship.  On route a scuttling was heard behind some crates ahead, Sgt. Kean and Trooper Beritz ran forward prepared for action and fiound a Cybermat.  No problem you'd think but it took both of them to take this little Cyber bug out! 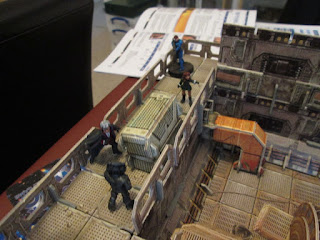 Meanwhile the Doctor, Liz and Trooper Caine take the alternate path and come across a patrolling Cyber Scout.  The Doctor tries to stun it with his sonic screwdriver but even with the luck of a Time Lord he wasn't successful, wrong setting perhaps? 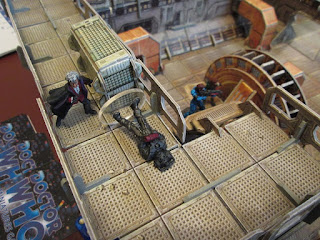 Finally the Doctor is successful at stunning the Cyber Scout allowing Liz and Caine to make it to the power generator.  Liz tries to turn the power off and so end the lock down however isn't successful.  It would take the Doctor's alien intelligence to take the generator down in the next turn and so all doors were opened allowing the remaining troopers to advance foward. 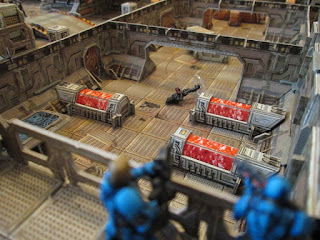 As Kean and Beritz advanced along the maintenance corridor Kean spotted a Cyber Scout holding a section of engineering.  Taking careful aim (and being a tad bit reckless with all that plasma about) Kean opened fire with his Laser Blaster and easily finished off the Cyberman. 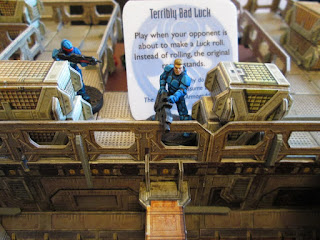 We continue to follow Kean and Beritz as they reach the main junction into engineering, the Cyber forces are now aware of the Doctor's activity and begin to hunt him down.  Kean yet again spots more Cyber enemies (a sharp one this Kean), this time a group of Cyber Slaves and their Cyberman controller, however they too have been spotted and the Cyber forces being to advance on them.  At this point Kean tries a risky tactic, the Cyber Slaves are currently passing an energy port and if he could take that out he may well take all of them out at the same time.  However Kean knew he would also be caught in the blast but had faith in his armour and the limited cover so fired.  Unfortunately the shot missed and no amount of luck was going to help him... (love the cards for DWMG even when they are played against me). 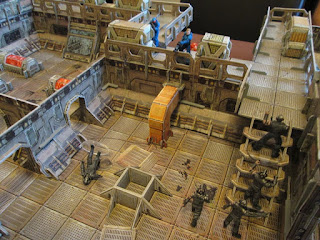 Kean tries again for the energy port and hits home.  We made up a variable strength for the blast of D6+D3 and 4 inch blast, unfortunately as the Doctor had taken out the power generator it seems there wasn't much power running through the port and only a strength 3 hit was caused which managed to take out just one Cyber Slave. 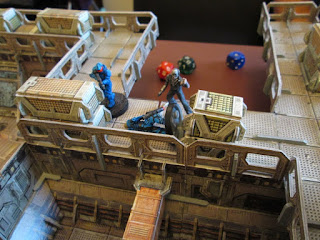 Kean paid for this as one of the Cyber Slaves got behind him and with a swift blow he was no more. 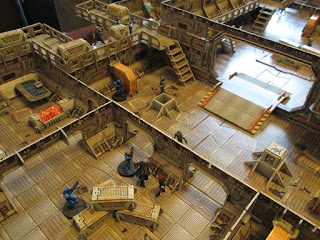 The Doctor and troops advance on the main engineering junction currently held by the Cyber Slaves. 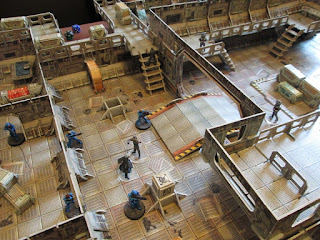 The Cyber Slaves are no match for the Doctor's force however one manages to grapple with the Doctor and slows him down.  In the end though the Doctor manages to slip from it's grip while a trooper finishes it off.  They then advance into the cargo hold but are caught in a crossfire, damn those cunning Cybermen. 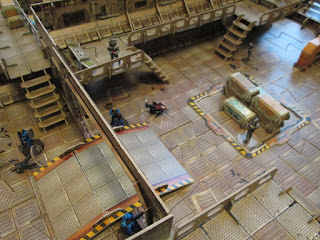 Unfortunately even as Liz collects the vital data from the crew quarters the Doctor is hit!  With his luck spent that was the end of the game and the Cyber Forces, though beaten down, were victorious... I guess its regeneration time.

I hope you enjoyed the read through as much as we enjoyed playing.

Email ThisBlogThis!Share to TwitterShare to FacebookShare to Pinterest
Labels: DWMG